Star-forming regions interact with their environment in massive galaxies

An international team of astronomers just witnessed how the sites of the most intense star formation in the early Universe communicate with their surroundings through rapid gas exchange. Their findings offer unprecedented insights into the most rapid evolutionary phase of massive galaxies, about 11 billion years ago.

The most massive galaxies experienced their most rapid period of growth when the Universe was only about 20% of its current age. Immense amounts of dust and gas gave rise to veritable fireworks of star formation, which have no peer in the Universe today. Most of these stars formed in giant, gaseous clumps, which were as massive as small galaxies today, but formed stars at rates that were a hundred times greater than those in the entire Milky Way today. The relationship of these clumps with their surrounding host galaxies has so far been largely unexplored.

The combined capabilities of NOEMA, the IRAM 30-m telescope, and the Submillimeter Array have now enabled researchers to witness for the first time that these clumps do not form their stars in isolation, but must be in constant gas exchange with their surroundings: “This is the first time that we have seen the direct signatures of molecular gas being lifted off one of these clumps, giving rise to a wind, which can remove most of the mass of this clump within only a few million years”, says Raoul Cañameras, lead author of the new study and former IAS graduate student (now at DARK, University of Copenhagen). “We discovered this wind as a subtle spectral feature in a bright emission line of carbon monoxide from a galaxy about 3 billion years after the Big Bang, which was previously unknown, and which we nicknamed ‘the Emerald’.” Due to the fortuitous position of a cluster of galaxies between the Emerald and the Earth, which acts like a magnifying glass, the team was able to study star formation on scales of a few hundred light years, which are otherwise only accessible within the most nearby galaxies.

“The gas velocities are high enough for the gas to leave the clump, but not the surrounding galaxy. It will therefore remain trapped, and perhaps be reaccreted onto the clump”, adds Nicole Nesvadba from IAS. “This means that the wind might limit the growth of the clump, but not of the galaxy as a whole, as is often assumed by galaxy formation theory.” Moreover, if the clump loses too much of its gas too quickly, or if this gas is not being replenished by rapid, on-going accretion, then gravity might lose its grip, and the clump itself might dissolve, releasing the young stars and remaining gas into the overall disk of the galaxy. In either case, clumps no longer seem as long-lasting, separate objects, but as temporary structures within a rapidly evolving galaxy.

The team also probed the emission from this intra-clump gas directly in the Emerald and a few other, similar galaxies, by observing several emission lines of CO with EMIR on the IRAM 30-m telescope in order to study the physical properties within molecular clouds. “These lines require different energies to be excited, and so by measuring their relative brightness, we can probe the density and temperature within the clouds, and also the intensity of the radiation produced by young, recently formed stars”, comments Chentao Yang from ESO, co-author of this study.

Multiple gas components with a range of densities and temperatures are commonly observed in nearby star-forming galaxies, where the most extreme conditions are found within star-forming regions, and less extreme conditions in the diffuse gas in between. However, so far, most studies in the early Universe could only probe the most vigorously star-forming clumps in galaxies, which have the brightest lines. “Seeing the direct fingerprints of gas which is less excited and less dense than in the star-forming regions themselves gives us direct insight into the diffuse component within the disk, from which new, massive star-forming clumps may form” says Cañameras. This second gas phase has the expected properties of intraclump gas, which must be distributed over larger scales, and outside of the strongly star-forming clumps themselves. The authors find that this gas can make up to about half of the total gas mass in these galaxies.

The galaxies studied in these papers are part of the ''Planck's dusty Gravitationally Enhanced sub-Millimetre Sources'' (GEMS), and were discovered with ESA’s sub-millimeter all-sky survey Planck. “While the Planck satellite was mainly built to study the ubiquitous relic “Cosmic Microwave Background” radiation from the Big Bang, our results clearly demonstrate its value also for discovering the brightest, and exceedingly rare objects in the early Universe, several billion years after the Big Bang”, says Hervé Dole from IAS, coordinator for the study of extragalactic sources within the Planck Collaboration. “The combination of Planck and IRAM is another nice example of the immense scientific potential of European ground and space-based observatories in furthering our understanding of the Universe”, adds Nesvadba, who leads the overall follow-up of the GEMS. 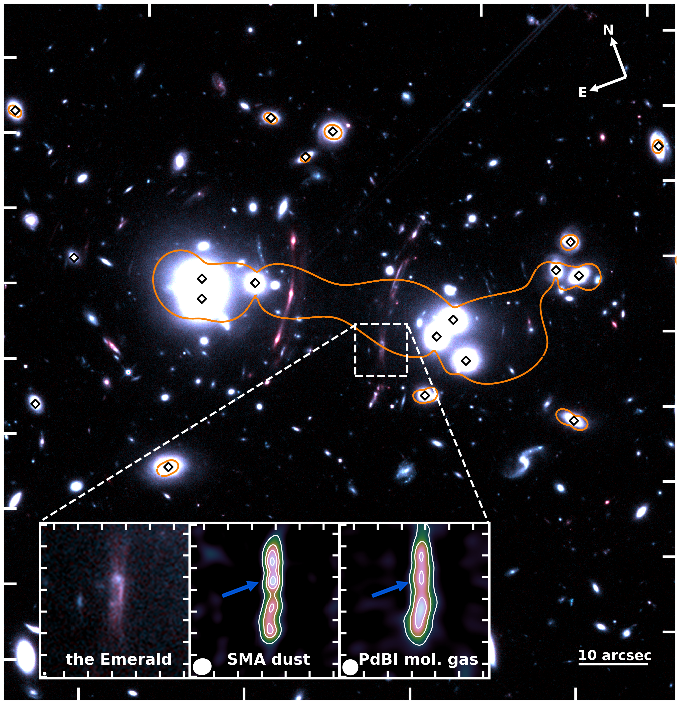 Fig 1 : Different views of the Emerald as it was about 11 billion years ago, showing the stellar (left inset), dust (middle inset) and molecular gas (right inset) emissions. The blue arrow shows the host of the molecular wind arising from an intensely star-forming clump, and detected with the IRAM interferometer. The overall image shows the galaxy cluster located between the observer on Earth and the Emerald. This massive cluster acts as a strong gravitational lens, distorting and magnifying the Emerald and other background galaxies, and allowing astronomers to study their internal properties in great detail. © Raoul Cañameras 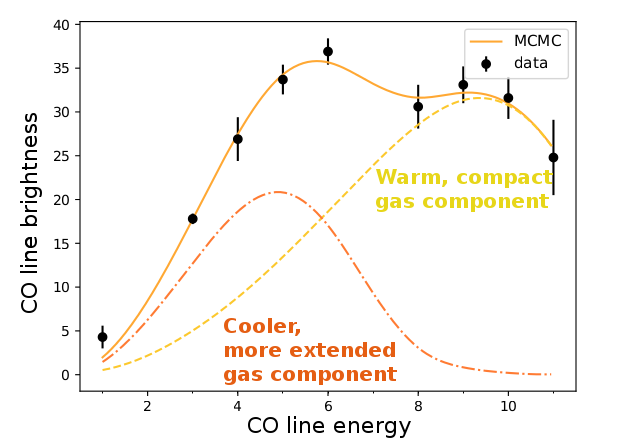 Fig 2 : Brightness  of the molecular emission lines, detected with the IRAM 30m telescope, as a function of their energy , for one of the   galaxies studied. The shape of this distribution shows   several components of molecular gas in this galaxy, including a hot and dense component which is directly feeding the formation of new stars.  © Raoul Cañameras