With MicrOmega at ISAS, IAS performs the first analysis of samples collected from Ryugu

JAXA's Hayabusa2 mission carried out a collection, never accomplished before, of samples of a very primitive carbonaceous asteroid, and successfully brought them back to Earth in early December 2020. The samples are now stored in the “Curation Facility” of ISAS, in Sagamihara (Japan), in ultra-clean chambers, in a controlled atmosphere, where initial analyzes are being carried out. These include a pioneer characterization by infrared hyperspectral microscopy, using the MicrOmega instrument developed at IAS, and integrated into the Curation Facility.

In a perfectly non-destructive way, MicrOmega produces images of 250 × 256 pixels with a pixel size of 22.5 µm, and acquires from each pixel the spectrum in the 0.99 — 3.65 µm range, chosen because it contains the diagnostic signatures of numerous mineral and molecular constituents. MicrOmega thus demonstrated the presence of hydrated and carbonaceous compounds in these samples of very low albedo (<3%), as well as other minor phases but very indicative of the processes of formation and evolution of Ryugu.

The MicrOmega measurements will continue at least until the end of 2022, with in particular the creation of a catalog for a large number of individual grains, including their composition, in support of the detailed analyzes which will be carried out subsequently: first, from the second half of 2021, by 6 international “Initial Analysis Teams”, under Japanese responsibility, in which IAS also participates, then, in external laboratories, after a selection in response to international announcements of opportunity.

With MicrOmega installed at ISAS, a new degree of cooperation with our Japanese partners has been achieved, for both IAS and France, as evidenced by the recent press release from CNES and CNRS (link below). It is also the accomplishment of a potentially very fruitful first, in the use of infrared hyperspectral microscopy to characterize extraterrestrial samples during preliminary analyzes in their preservation chambers, before distribution to the community. The expertise acquired by IAS in the development of very high performance miniaturized space instruments has played a crucial role in the selection of MicrOmega, which now expands the remarkable success of this very pioneer space mission. Through IAS, France is currently the only country to have been invited to participate alongside Japan in this initial stage of the analyzes of the collected samples.

Video of one of the Ryugu samples returned to Earth by the Hayabusa2 mission, emphasizing the presence of few grains of specific composition, here with enriched OH-content. 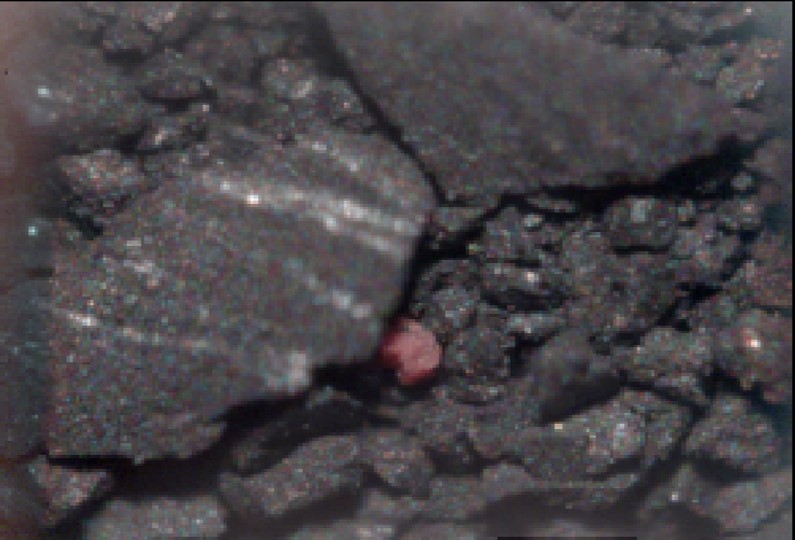 False colors image of a sample from Ryugu (image width: 5mm) made to enhance the presence of few grains with specific composition, within bulk material. Here, a highly OH-rich grain.