IAS will lead one of the first JWST observing programmes

With its observations in the middle-infrared range, the James Webb Space Telescope (JWST) is going to revolutionise our understanding of the Universe. After a competitive selection, its first observing targets have been unveiled. Over the hundred or so programmes proposed by researchers form all over the world, only 13 have been selected. One of them will be led by a collaboration involving IAS researchers.

Often presented as Hubble's successor, the James Webb Space Telescope (JWST, launch planned in 2019) will be the largest ever space telescope. Developped by NASA, ESA, and the Canadian Space Agency (CSA) with many other laboratories in the world, its launch is planned on an Ariane 5 rocket in 2019.

Six months after launch, astronomers will immediately have access to data obtained by the first observing programmes of the mission. These “Early science programs” have now been selected by the Space Telescope Science Institute (STScI), that manages the JWST scientific operations for NASA. They will highlight the potential of the four scientific instruments on-bord the JWST, and will cover various topics such as distant galaxies, exoplanets, Jupiter and its moons, and the search for organic molecules around stars.

One of the selected programmes will be conducted jointly by the Institut de Recherche en Astrophysique et Planétologie de Toulouse (IRAP, CNRS/Université de Toulouse III Paul Sabatier), the Institut d'Astrophysique Spatiale (IAS, CNRS/Université Paris-Sud) and Université of Western Ontario (Canada), with 119 collaborators in 18 countries. The selection of this programme in an extremely competitive international environment is a great success for the involved French scientific community.

This programme aims at observing regions of our Galaxy at the interface between dense clouds, where stars are born, and diffuse and ionized regions. Critical physical and chemical processes occur in these interfaces, emitting radiation with an extremely rich spectrum that constitutes a large part of the infrared emission of the Galaxy. These regions are unique laboratories for studying multiple but yet unknown microphysics processes that lead, in particular, to the formation of stars and their planetary systems.

Previously, observations provided only a global view of complex physical and chemical dynamical processes. The JWST will soon observe these interface regions with unprecedented detail. Its angular resolution and outstanding sensitivity will allow us to map them at very small spatial scales. Through the different physical and chemical boundaries, we will access the chemical composition and the physical conditions of a very structured medium (with entangled filaments and globules). The JWST will thus provide a new view on the evolution of interstellar matter and the causal relations between existing stars and star formation.

This programme relies on the skills developed at IAS since its creation, with support from CNRS, Université Paris-Sud, and CNES: the implementation of long-wavelength space instruments (ISOCAM, Planck, PILOT), the calibration station, in-flight operations and data processing in the IDOC centre, data analysis, astrophysics modelling, and the laboratory analysis of extraterrestrial materials and interstellar dust analogues. IAS collaborates on these topics with various partners in Université Paris-Saclay and Labex P2IO (DAp/AIM, CSNSM, IPNO…). 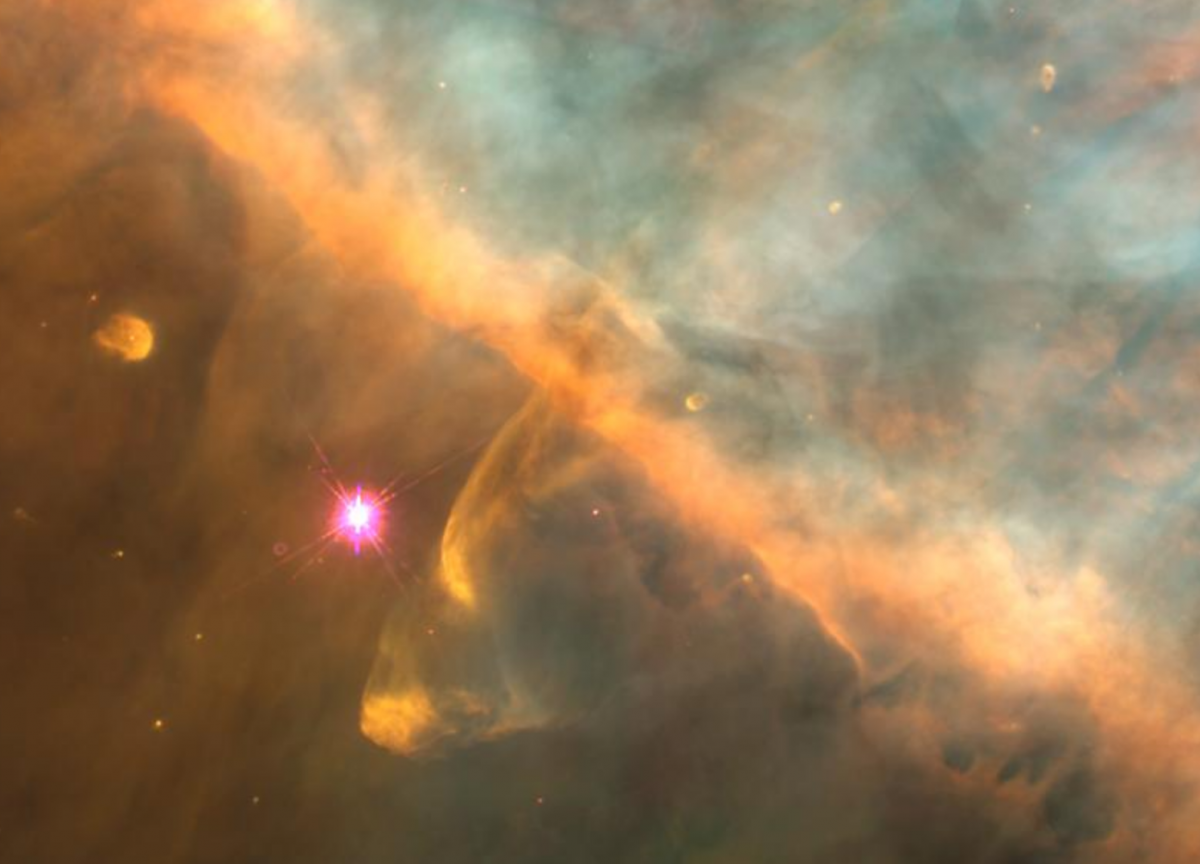 HST image of the Orion nebula, at the interface between dense and diffuse (and ionized) regions. 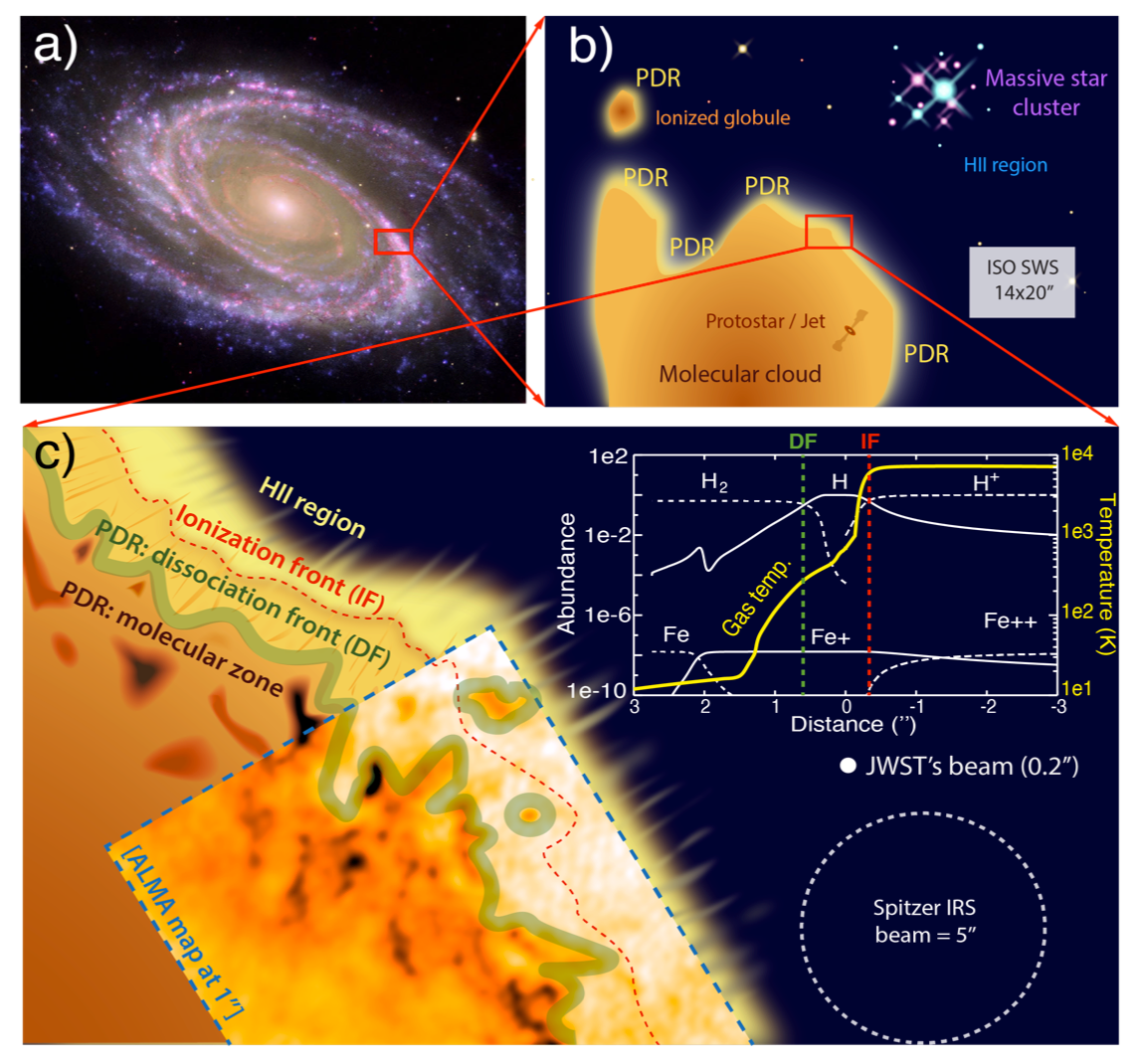 b) View of a star-forming region at a distance of 2 kpc.

c) Zoom of one of the PDRs, showing the complex transition between the molecular cloud and the ionized region. Molecular gas data from ALMA in the Orion bar at a resolution of 1 arcsec are overlayed. The inset shows a model of the PDR physical structure. The FUV photon penetration depth corresponds to a few arcseconds. The lobes of previous infrared missions (ISO-SWS, Spitzer-IRS) and JWST show the angular resolution gain.