Euclid : the French collaboration meets in Orsay, 3 years before launch

Euclid is a space mission of the European Space Agency (ESA) whose takeoff is scheduled for 2022. This mission of cosmology aims to better understand the source of the acceleration of the expansion of the universe and the nature of the dark energy and gravitation, and to better map the presence of dark matter by the observation of several billion galaxies, tracing the history of the universe over more than 10 billion years.

This major mission of ESA's European Cosmic Vision program is already an international reference, and brings together more than 1,500 researchers, engineers and technicians involved in many European countries, with participation from the USA and Canada.

France has an important role in the mission, thanks to CNES support. With about 500 Euclid members in France, CNES, CNRS, CEA and universities provide significant human resources and technical infrastructures.

In Orsay, the Institut d’Astrophysique Spatiale (IAS, a joint laboratory of CNRS and Université Paris-Sud / Université Paris-Saclay) designed, manufactured and tested the Calibration Unit (CU) of the VIS instrument and contributes to the development of the scientific ground segment (SGS) - in particular the data merging unit of the different instruments, called OU-MER - as well as the Science Working Group (SWG). The flight model of the CU has been built, tested, delivered and is being integrated to the flight model of VIS.

On November 27-29, 2019, the French community of the Euclid collaboration met to discuss updates about the mission. This event, organized by the IAS and held in the new building of the Institute of Mathematics of Orsay (IMO), was an excellent opportunity to discover all the many French contributions to the Euclid mission, learn more about the progress of the mission and facilitate exchanges between participants.

In addition, side events were organized by the IAS Euclid team at the university, like a demonstration of the functioning of the Euclid VIS Instrument Calibration Unit qualification model by the instrumental team of the IAS. A jazz concert was performed by musicians from the conservatoire Paris-Saclay. The CPPM and LAM colleagues, by bringing their 3D helmets, presented films in virtual reality. Finally, a tasting of a "pie of the universe" (which reproduces the proportions of the content of the universe in dark energy, dark matter, baryonic matter and relativistic species, as measured by the Planck satellite, in which the IAS played a major role) made especially for the occasion, was proposed by the caterer Sylvain Gasdon. A group photo was made in visible and infrared imaging, a nod to the future Euclid data that will cover the visible and near-infrared domains. These beside show that astronomy, gastronomy and music can cross harmoniously. 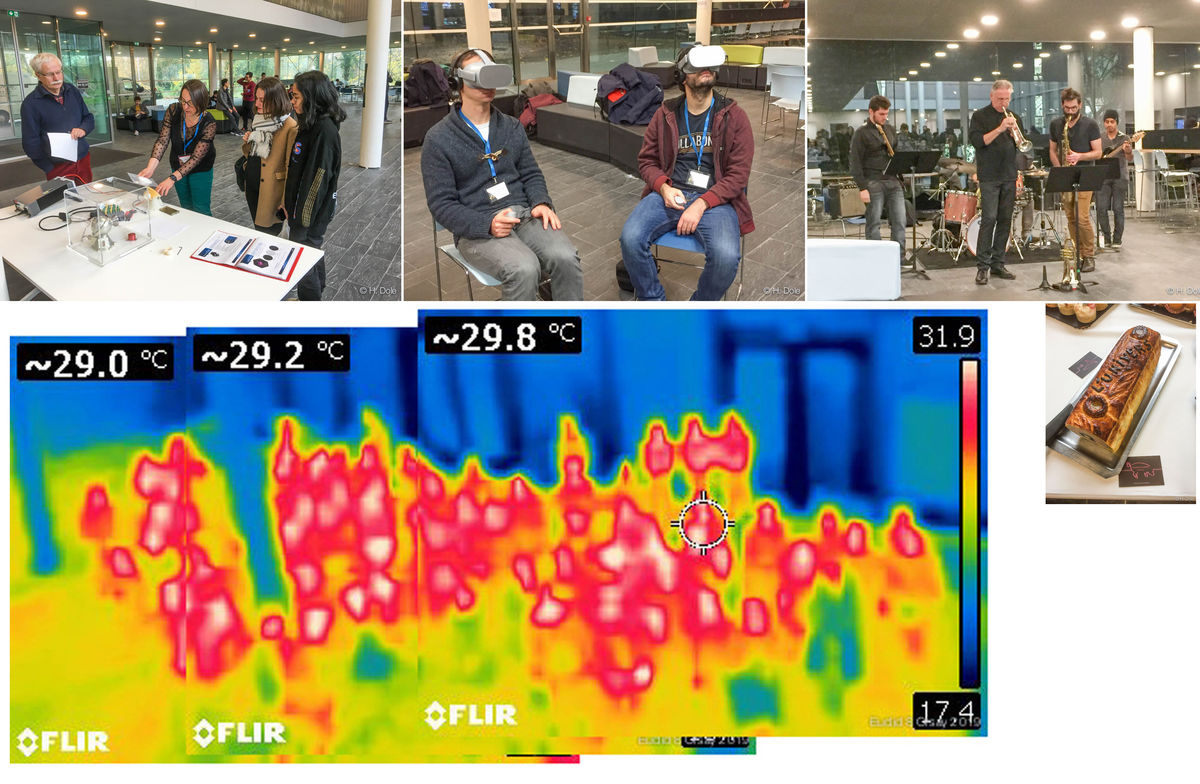 from top to bottom, left to right: Running the Euclid Calibratiin Unit; Virtual Reality show about cosmology; Jazz concert with musicians from the music school Paris-Saclay (CRD); infrared picture of the participants; specially designed "pâté of the universe".